Some Grossly Indulgent Self Promotion, And A Story Called Gross 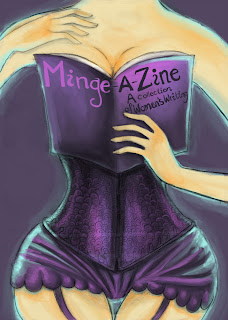 I know. I know. I'm sorry. This blogging business has just gone out the window, what with the working and the minging and then being in another show at the same time and the talking about the vulvas on national television. But in the words of a Abraham Lincoln, this too shall pass, and the week after next is going to be some kind of mecca of eating dinner at normal times, doing the washing and seeing if my girlfriend remembers me. In the mean time I'm going to post this story here, a story called Gross. Gross is from The Minge-A-Zine: A Collection of Women's Writing, and it is full of the stories written by the women in MINGE, and their friends, which we collected as part of the devising process for our play, MINGE: A Celebration and Interrogation of Womanhood in New Zealand. Gross is one of 31 anonymous stories in the A4 zine, which has edited by yours truly, designed by Kimberley Berends and illustrated by Hannah Smith and Erin Banks. (Although Jem Yoshioka did our front cover art.) Basically, I'm blathering on about the zine because you can buy it! We have a shop! That sends things overseas! Three exclamation marks must mean that it's an exciting time. If you don't live in Wellington it is a cool way to support this thing I have been doing, and if you do live in Wellington you should pop yourself onto the waiting list for our remaining three performances and buy a zine in person at BATS Theatre.
----------
There are some things my body does that I think are gross.

I find it gross to smell a pair of tights when I take them off after walking to work and sitting in a chair all day and then walking to Kelburn and going to a meeting and then having ten beers at the pub and then dancing to Patti Smith. Those are bad tights. Those are only-can-be-worn-once tights. Well I put them in the washing machine and then wear them again but I mean they are "can’t-be-worn-consecutively-at-all-ever-tights". I find it gross, or sometimes grossly funny, when I eat gluten and fart all night. I find it gross when I eat beetroot and haloumi from Aro Cafe and my poo turns purple and my piss turns pink. Vomiting is gross. Diarrhoea, or as my dad calls it, die-horry, is gross. Underboob sweat and the milky smell of a well worn bra is gross. Squeezing a blackhead so it emerges like a triumphant maypole between my tits is really gross. Sneezing and getting drippy snot on your collar is gross. Squeezing an infected ear piercing, morning death breath, period blood clots in the bath and greasy hair are all gross things.

There is something else that my body does that is not gross.

The first time this happened to me I was eighteen. I was in town with my friend Sam and we went home with two Australian DJs. As I said, I was eighteen and I feel like now that I am twenty two and wizened and bitter and skeptical I would be less inclined to believe that anyone was a DJ, but he had an Australian accent and he was staying in a hotel on the strip in Christchurch. He bought me a martini, drained the glass and then kissed me with the alcohol in his mouth. I thought it was sexy. Their hotel room had two double beds. Sam and I had sex with our maybe-DJs metres away from each other. When the DJ was fingering me, he said ‘You like that, your legs are shaking’. Thanks, I thought. Thanks, Captain Obvious.

I liked it so much that I squirted. There was a wet patch on the thin hotel sheets and I thought I had peed everywhere. The maybe-DJ said “Fuck, maaaaaaaaaan, this bed stinks like pussy.” I was humiliated. When I was leaving I couldn’t find my new Elle MacPherson undies. If I saw the maybe-DJ now I would thank him for introducing me to something awesome. Something that he thought was gross.

The fluid is not urine. It’s not regular wetness. It smells different and it feels different. It’s more like water. For me this happens more regularly now, but not on command. Sometimes it just seems to drop out. Sometimes it’s tiny little spurts. Sometimes it gushes and I feel it warm and wet on my stomach. Sometimes it’s a couple of table spoons. Sometimes it’s cupfuls and the sheets have to be changed and the bed has to air dry. It happens with G Spot stimulation, usually just before I come. I can’t really do it by myself because my arms aren’t long enough to reach inside me. My girlfriend says that first she needs to touch my G Spot, and then she has to fuck me really hard.

But what I think the problem actually is here, is that people don’t talk about this shit. Scientists haven’t figured out what the fluid is, but they think it is from the Skenes Gland. Some tests have shown the fluid is like semen, but without the tadpoles. Maybe scientists should stop pissing around looking for planets and doing studies about everything that mothers do to fuck up their children, and they should hang out more with vaginas. Apparently not very much is known about women’s bodies because women are way less likely to donate their bodies to science when they die. So maybe now, when I die, I will donate mine under the specific clause that my gushing pussy should be investigated. I hope I live to a really old age and it makes my children smile when they have to negotiate that with the coroner or the funeral home or whatever.

Some people think that female ejaculation is a myth. I think they can come and change my sheets. So talk about it.. Gush about gushing. I shouldn’t have had to fuck an Australian maybe-DJ to find this out about my pussy.

Sometimes, when my G Spot feels awesome and then I get fucked really hard, I’ll squirt everywhere. This is awesome. This is not gross. If you think it is gross then you are an idiot.
------
Minge-A-Zines are available for purchase on our Big Cartel site. NZ$7 for those in New Zealand, and NZ$10 for those who live on faraway shores. I was going to take a picture of me holding the Minge-A_Zine for further self promotion purposes, but I can't really be bothered putting a bra on. Sorry. I will save this for another day.
Posted by Ally at 2:36 PM