An Ode to Hate on a Sunday Afternoon 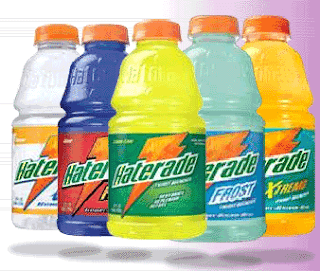 I hate lots of things. I'm not even ashamed of it.
I hate organised fun, including cards and board games and team building activities and team sports. I hate savoury muffins and savoury scones, and actually I hate muffins in general because they are just ugly cupcakes. I hate when people try and put sweet toppings on bread, because BREAD IS A SAVOURY FOOD. I hate when people use the word 'Kiwis'. I hate when people use the word 'Aussies'. I hate the Air New Zealand Rugby World Cup safety adverts. I hate Jetstar even more than I hate Air New Zealand. I hate when people tell me to 'check out' something, because I will more than likely NEVER CHECK IT OUT if you use that phrase. I hate it when beauty products are discontinued. I hate dried fruit and fruit cake and marmalade and jam. I hate the Phoenix Cola that is flavoured with honey. I hate when restaurants don't have a chocolate flavoured dessert. I hate mixed berries and blackberries and black currant and sometimes blueberries, because obviously the raspberry is the queen of berries. I hate when things are raspberry and white chocolate flavoured, because it is such a fucking waste of raspberries and WHY CAN'T YOU GIVE ME THE REAL CHOCOLATE. I hate wearing a cotton top AND a cotton skirt. I hate not having enough condiments. I hate getting charged extra for condiments. I hate when people put celery in potato salad. I hate it when there isn't enough feta. I hate the rubbery stalky bit on portobello mushrooms. I hate shittake mushrooms. I hate sow crates. I hate that rapey Christmas song 'Baby It's Cold Outside'. I mostly hate the Simpsons and I fucking hate Family Guy and I hate animation. I hate Science Fiction. I hate the Big Bang Theory (the show, not evolution). I hate when people say that 'hate is a strong word' because that is the fucking point, actually. I hate that Ben Harper song about stealing kisses. I hate Paul Henry. I hate John Key. I hate the rain. I hate noisy construction work. I hate buskers. I hate camping. I hate tramping. I hate the outdoors and usually I hate scenery because I maintain that it's just rocks and water (and I could look at that from inside thank you very much.) I hate adventure tourism. I hate when cafes don't have hollandaise and I hate paying extra for soy milk. I hate moths. I hate Matthew McConaughey and Kanye West and Jennifer Garner. I hate outer space. I hate top sheets. I hate bok choy. I hate the noise that skateboards make. I hate the new lids on super pump drink bottles.
And I fucking hate this fucking billboard. 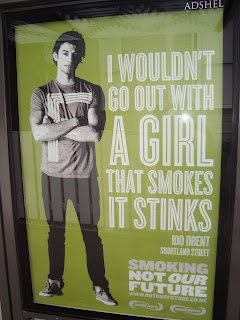 I am fucking unimpressed with this billboard. It makes me want to use all kinds of ableist language (like stupid and lame and idiotic) that I am really trying not to use anymore. 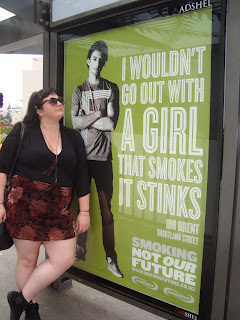 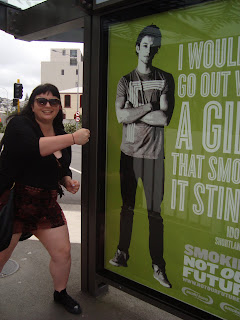 This billboard (or whatever you call an advertisement placed in one of these weird shell things) makes me want to run straight to the dairy and buy a pack of Malboros so I can chain smoke them all in a row, even though I haven't had a cigarette in like, two years. I do not care about your relationship criteria at all, Ido Drent. I don't want to be your girlfriend. THE VERY SLIGHT POSSIBILITY THAT ONE DAY YOU VERY WELL COULD MAYBE BE THE GIRLFRIEND OF A B-GRADE CELEBRITY IS PROBABLY NOT GOING TO MAKE ANYONE GIVE UP SMOKING. I am insulted that this would be considered such a valuable prize.
I get that Smokefree has already advertised about health benefits and lung cancer and tongue cancer and throat cancer and second hand smoke and saving money and gangrene and heart disease and the tobacco industry and every other fucking thing under the sun and that people are still smoking and it is their modus operandi to get less people smoking, so they tried something new with the Not Our Future campaign. Fine. Mostly. That advert where the celebrity-who-I-can't-remember complained about cigarettes being kept beside the milk was kind of annoying, because anyone who has been into a dairy ever knows that they're actually in pretty different parts of the shop. Like, nobody keeps cigarettes in the fridge. But that's cool, it even seems like the campaign might have been kind of successful. Which is good, I think. (Even though I'm kind of confused about where I stand on the anti-smoking lobby, because obviously smoking isn't great and tobacco companies are manipulative, lying, terrible, money-hungry fuckers and that information should be circulated so people can make their own choices BUT often those adverts are really patronizing and some of the BAD FOR YOU rhetoric comes uncomfortably close to a lot of the obesity panic rhetoric, and I really don't think that health should be a prerequisite for respect. Oh wow, that sentence is long. I just thought about deleting it. I'm not going to though, I don't think, because isn't stream-of-consciousness-writing very popular and doesn't it give you a valuable insight into my brain on a Sunday afternoon?)
What was I saying? Oh yeah. Ido Drent. Smoking. Girlfriend. Get to the point, Ally. Advertising to young ladies about how they would be more dateable and girlfriend worthy if they gave up smoking? I hate it. Placing so much cultural currency on relationships? I hate it. Assuming that every girl wants to be in a relationship with Ido Drent? I hate it. Three of the Not Our Future adverts with themes about relationship-criteria-slash-increasing-your-dating-potential-slash-smoking-is-a-turn-off adverts being aimed at girls and only one being aimed at boys AND all of them being predictably heteronormative? I hate it. I can think of a million reasons to give up smoking, if you want to, and Ido Drent isn't one of them.
Posted by Ally at 5:26 PM