Thinking about acting like an idiot on the internet. And sizeism. And a picture of Beth Ditto's sweet behind. 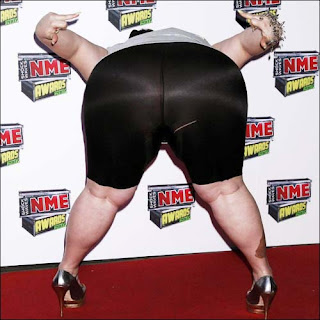 And I guess that this might seem kind of inoffensive. But actually, I am offended. I am offended because calling someone fat isn't just a description of their body shape. The social meaning of the word means they are a smelly, awful, unlovable pleb who eats nine Big Macs every day and probably never has sex and also definitely has diabetes and will die of a heart attack in the next seven months. Kate Harding wrote an essay about this and you should read it because she is smarter than me. But I think that this little Facebook post here by Anonymous Facebook User [AFU], and liked by three other Anonymous Facebook Users, shows how ingrained jokes about fat people are in society. And how easy they are to make. As easy as making a cake with a cake mixer, or as easy as keeping your tights up when you know that you just have to wear a pair of black undies over the top. They're so easy because you use the word fat and you immediately have a punch line. And like I said last time, this is Facebook. It is public. I wasn't aware that fat people weren't allowed to have iPads, and also that they weren't allowed to think they are "cool". God forbid a fat person uses a piece of technology in public, in case someone thinks they are trying to be impressive. Don't you realise that you can't be impressive if you are a fat person? Even if you have an extremely well paying job that means you can buy an iPad, you better not use it in public in case ANFU thinks you are trying to impress her.
Ultimately nobody is winning by making these kind of jokes. Unhealthy fat people get the message that their body is something to be ashamed of, and they don't want to spend any time nourishing it or moving it around. I don't know anyone who has ever wanted to look after something they hate. Beauty standards continue to be perpetuated, fat people continue to be othered and thin people continue to fear being fat. How is it a good thing that 50% of women aged between 18 and 25 would rather be hit with a truck than be fat? Living in fear of YOUR OWN BODY is not a good way to live, and nobody needs to live like that ever since they figured out that spontaneous human combustion is a myth.
So, Facebook. Fat shaming. I can't sum it up as neatly as I would like to. But I'm going to keep trying. Facebook makes this kind of kitchen sink anthropology pretty easy. Almost as easy as making a fat joke.
Posted by Ally at 2:19 PM